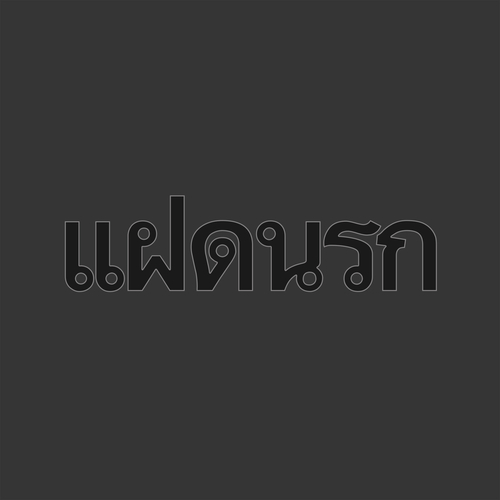 แฝดนรก (FAET NAROK):
Since the Desertshore project was first proposed back in 2006 there always existed the notion of an 'evil twin' mix in addition to the guest vocal version - แฝดนรก (Faet Narok) is that 'evil twin' album. Elements of this album are derived from recordings made by Sleazy in 2010 and audio explorations we pursued during the recording of the Desertshore 'mother album' including selected parts from the guest vocalists. As you may expect, 'Faet Narok' is difficult to categorise ... but as Sleazy would say "it just is".

The final part of the X-TG story is แฝดนรก (Faet Narok), a bonus "dark" version of Desertshore that comes as a download with the special edition of Desertshore/The Final Report. It is quite different from Desertshore even though it follows the same layout as the main album. The bonus album’s title roughly translates from Thai into "double hell," but the music is far from hellish, indeed it may be darker but it is nicely soporific and ambient. The vocals are treated and pushed into the music, becoming part of the sound rather than becoming background detail. Antony’s voice becomes a plaintive call from behind the veil, Bargeld’s a polyglot babble of madness. Even Grey and Noé sound much better here as disembodied forms than they do in the "proper" versions.

The pieces that feature Cosey come out best in this way, "Faet Norak Five" (the reworking of "All That Is My Own") is especially good. The lyrics are still barely audible and the music moves at a slow, almost subconscious pace; together it feels like the song has slipped from my normal perception into some dream-like state. "Faet Norak Eight" (a version of "My Only Child") sounds like a hymn, albeit one that has drifted in via Tangerine Dream rather than a church. It reminds me of the sort of vibes that Andrew McKenzie of The Hafler Trio got out of his remixes for Fovea Hex a few years ago; stretched sounds and remarkable reverberation coalescing in the air around me.

While Faet Norak is a nice addition to this final collection, it seems strange to tag it on only as a download. It would have made more sense to me to include it and Desertshore together as a proper release and give The Final Report its own individual release. However, having it at all is better than nothing so beggars cannot be choosers.

Unfortunately at this time we can't offer all the X-TG - แฝดนรก (Faet Narok) tracks as individual flacs, as some of these tracks exceed the shops maximum (9mins) download length.

These longer flac tracks are available in the full album download.

Unfortunately at this time we can't offer all the X-TG - แฝดนรก (Faet Narok) tracks as individual flacs, as some of these tracks exceed the shops maximum (9mins) download length.

These longer flac tracks are available in the full album download.